Today, on the 100th anniversary of her great-great grandfather Robert Peary's "discovery" of the so-called North Pole, Roberta Peary announced, after exhaustive research on Wikipedia, that she had located the true North Pole. "And it ain't where everybody thinks..." she said via iPhone earlier today.

In a conscious echo of her great-great grandfather's message to the New York Times on April 6, 1909 (I have the pole, April sixth. Expect arrive Chateau Bay, September seventh. Secure control wire for me there and arrange expedite transmission big story. PEARY), Ms. Peary sent a tweet to all her followers on Twitter: "Have danced with the Pole, April sixth. Expect arrive Minsky's April seventh. Pole-dancing today. Table tomorrow."(113 characters -- with spaces)

If the North Pole is not where everybody thinks, despite the fact that the Navigation Foundation vindicated Robert Peary in 1989, just where is it? In a long conversation with Ms. Peary on MSN, she indicated the location of the North Pole on Google Maps. Here is the map: As you can see, the North Pole is naturally in Poland. In the town of Wladyslawowo, one of the northernmost points in Poland, with a population of approximately ten thousand. Not only that, but the name of the North Pole is Wladyslaw Wowo, a retired longshoreman originally from Gdansk, where he practised counter-revolution with Lech Walesa. Mr. Wowo claims the town is named after him, but the town is not so sure.

In our drawn-out conversation, I asked Roberta Peary how she could be sure that Mr. Wowo was indeed the North Pole.

"He has the documentation to prove it. His profile is on Wikipedia. He has a page on Facebook, LinkedIn, MySpace, Beebo, and about 36 followers on Twitter. You can't ask for much more than that."

I asked Roberta Peary about her background in arctic exploration. "After dropping out of high school," she said, "I spent several years dispensing Coke from a Coke machine. That was a tough job. Very cramped conditions. Cold on one side...the cooler part. Hot on the other...the compressor part. I knew I had to escape from the machine. Nobody likes to be a slave to the machine. And the tips were lousy. Sometimes I just swallowed the coins and didn't give people their Cokes. Then they'd start banging on the machine or rocking it back and forth. Scary, I tell you."

"As I say, I did that for several years, but I really got my big break when I discovered on-line search engines and on-line research. I started with my great-great grandfather's Trip-tych, which the American Automobile Association made out for him to get to the North Pole. It seemed to me that he had taken a wrong turn at Peoria. I dug further into the resources of Wikipedia and everything I found seemed to confirm this. From there, I just followed the links and they led me to Wladyslawowo and Wladyslaw Wowo."

I asked her, "For a hundred years, more or less, the world has generally accepted that it was your great-great grandfather Robert Peary, who reached the North Pole. Do you feel that you have undermined what, at the time, was considered to be one of mankind's greatest accomplishments?"

"No, certainly not," she replied. "I feel as if I'm setting the record straight. It's always the women who have to keep men in line, keep them on the straight and arrow, make sure they straighten up and fly right, and my great-great grandfather, as great-great as he was and is, didn't fly right, didn't sail right, didn't drive right. No, he took a wrong turn and ended up trudging through the snow in some God-forsaken arctic tundra when he could have just taken the train to Wladyslawowo. Not to mention the fact that he denied Wladyslaw Wowo his rightful due as the true North Pole, strong and free."

I thanked Ms. Peary for her time and asked if she could put me in touch with Mr. Wowo. She gave me his phone number. So I cranked up my Skype and when the operator came on I called out, "Mayfair, give me Pennsylvania 6-5000," and through the miracle of modern technology was connected to Mr. Wowo within thirty-two hours.

"Mr. Wowo, how does it feel to be finally discovered?" I asked.

"Yes, all right. But let me ask you, why do you think Robert Peary went astray?"

"As you know, according to the New York Times, Peary's first communication after reaching the pole..."

"He not reach Pole! I never meet him!"

"Yes, sorry," I said, "His first communication was to the New York Times, and his second was to the Associated Press, in which he said, Stars and Stripes nailed to the pole. PEARY."

"Yes, I hear this story. There is famous photograph of flag. Here, I show you."

Mr. Wowo sent me the photo by email. Here it is: 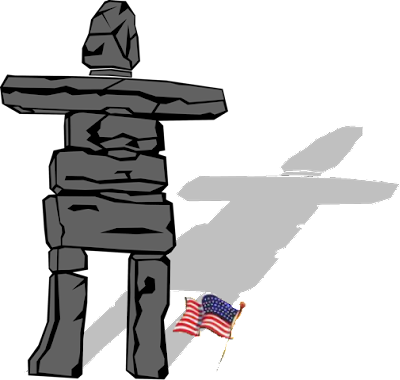 The photo clearly indicates a flaw in Robert Peary's claim. Yes, the flag is there, but it's planted right next to an inukshuk, known throughout the universe as an Inuit artifact. Therefore, either Peary had not discovered the North Pole, free and clear, or he was not the first human to arrive.

I asked Mr. Wowo about this. He said, "Yes, there is story about this. Reporters ask Peary about this, this, this, inuktitut whatever, and he bluster, he splutter, he make rolling in the eyes, and then say, 'Well, naturally I just naturally assumed that it was a natural phenomenon and put it down to the natural curiosity of polar bears...' This is very hard for me to say like Murrican...You want more wodka?"

He poured me a straight shot, but since I was in Canaduh sitting at my computer and he was in Poland sitting at his computer, he had to drink it himself. Which he did with obvious relish.

"Do you think I could have a photo of you to post on Mental Blog?" I asked.

"No! No photograph! People must not see who is Wladyslaw Wowo the North Pole! There are too many -- how-you-say -- Minnie the Moochers. Is like winning Polish State Lottery! Everyone will say, 'Ah! So now Wladyslaw Wowo is rich man, and famous! He will give us money!' Then everyone tries to get a piece of Pole. No. No photos. But here...I will give you photo of my True North Pole installation which is in front yard of my house. It is like this Robert Peary's, only is the true flag planted next to true Polish inuktithingy."

Here is the photo Mr. Wowo sent me over the Internettle:* 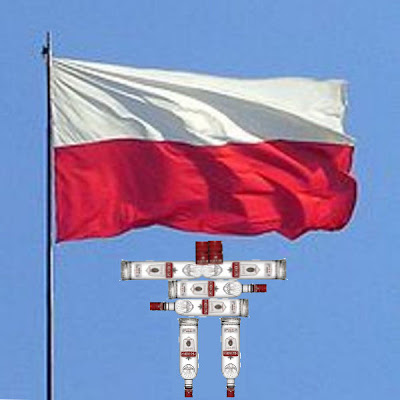 "Thank you for the photo, Mr. Wowo. Are those wodka, I mean vodka, bottles that you used to make the inukshuk?"

"Yes, very good Polish wodka. I get them from my cousin. I must tell you, my cousin, he is South Pole. He is true South Pole! Here! I send you map of location of True South Pole!"

Here is the Google App Map Mr. Wowo sent me: 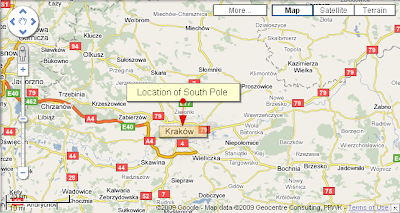 "Next month this Ms. Roberta Peary she will come to see me and we will visit my cousin in Krakow. Yes, in Krakow is definitely South Pole. His name is Jerzy Milkski. He is wodka salesman. He is on the road very much."

"You mean he's a travelling salesman?"

"No. I mean he is on road falling down often. Too much wodka."

"Ah," I said for lack of anything better, "But Krakow is not in the deep south..."

"Yes, he lives in winter more south but in summer he moves to Krakow. He lives at 4 Biwa Lane, Krakow, Poland. He is for sure South Pole waiting to be discovered. You should come visit. Especially April is wonderful in Krakow. There is famous song...April in Krakow. But Jerzy Milkski will make Krakow more famous for South Pole. You will see. We could hit road together, drink wodka. Lots wodka from Jerzy. You could write on Mental Blog...a series! Call it On Road. What you think?"

"Thanks, Mr. Wowo. I'll have my people call your people."

That was my foray into arctic and antarctic exploration, via Internet. What an adventure, eh? And the people you meet! Roberta Peary is now my friend on Facebook. Jerzy Milkski wants to connect with me on Plaxo. And the truth of the true North Pole has finally been revealed.

*Some hypercritical critics might suggest that these photos are not authentic. They will say that the inukshuk in the Peary photo is nothing but a clip-art picture with a Murrican flag (and not even the proper one for the period!) photoshopped in. And the vodka bottle inukshuk is clearly a photographic mashup, they will murmur. But not so! These photos were subsequently authenticated by the Royal Wikipedia Society, and if that ain't good enough, I don't know what all is!

I heard that some eminent polar bears are organizing a meeting on two large ice flows at their insidiously questioned North Pole. They would have liked to have one big flow, but due to global warming such big flows for large gatherings are not to find anymore. The two ice flows are situated close together just off ice covered Greenland. One would expect Iceland but ironically Iceland is green. The polar bears are upset that their North pole territory is being questioned. They will look at their indebt history and mean to proof Roberta Peary wrong. They also plan to start an action against those Poles to stop them from poluting their Arctic waters with vodka cans.

Meanwhile the penquins in the Ante-Arctic will meet near Mt. Radilinski to dicuss similar issues. They keep iPhone contact with their Northern allies, the polar bears.

"Information issued from the bureau of reliable resources"