Prime Mystery Stephen Harpie today appointed eighteen new Senators. These new Senators will represent the Constipated Party. Mr. Harpie is trying to even up the odds cuz the Constipators have been playing short-handed for quite a while. Never mind that he holds the Prime Mysteryship at the pleasure of a malleable Governess-General and a fractious Parliament, which isn't even in session thanks to him. Never mind that he swore he would never appoint Senators who had not been elected (cuz he's in favour of a triple-E Senate...effective, elected, and equal...) (Actually, not really a bad idea...the main reason Senate reform hasn't happened yet is because it's being blocked by those nasty Gliberals who have been on the power play forever, and the Constipators have been short-handed...) Never mind all that. Never mind that Christmas is only a couple days away. Prime Mystery Harpie delivered some early Christmas presents. 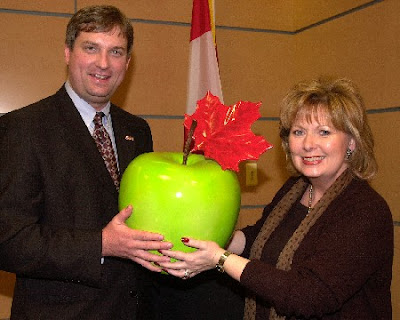 Pamela Walleye: Former TV person, alleged journalist, wrote a book about cats, former Consul-General to the US of A. Now she has the plum assignment of Senator from Skatchewan. OK, so it's a big apple. 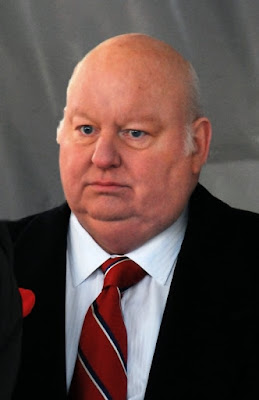 Mike Puffy: TV Personality, alleged journalist, has a political gabfest talkshow. When not being an ostensibly unbiased reporter and interviewer, he expresses quite hard-line conservative opinions. How these two things may be reconciled is difficult to say. Mr. Puffy suffered a serious heart attack some time ago. His doctor told him he really should lose some weight, so Puffy unpuffed to the tune of 100 pounds. Not. 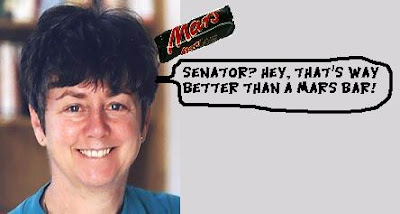 Nancy Greene: Skier. Famous. Loved by everyone. Shill for Mars Bars and GM.
And Constipators.

Hey Larry, so what's up with you? Did they let you out of that place for wayward poets?