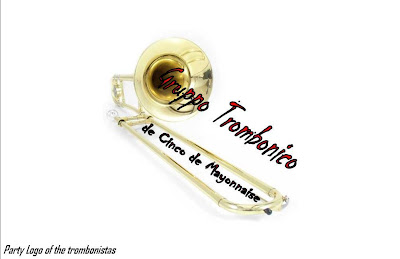 A band of radical evolutionary left-handists calling themselves the Gruppo Trombonico de Cinco de Mayonnaise has taken over River City's City Hall. The Gruppo, popularly known as trombonistas has occupied the mayor's office and is demanding an end to discriminatory labour practices and calls to work out of season.

River City's police surrounded the City Hall, after some confusion over its location, and have attempted to open negotiations with the desperate trombonistas.

Police Chief, T. Bell stated, "It's not clear yet whether we can coax them out of the building, or the office for that matter. It's rumoured that the mayor has a rather large cache of Jack Daniels, and that appears to be a major stumbling block. One of our officers knocked on the door but was met only with chants of "No More Backsliding!" and "Free Jack Teagarden!" Personally, I think it's less serious than it appears. I think this may be just an escape valve for them."

The mayor, however, Mr. J. Teagarden, was not so sure. "Boy, we got trouble. The suburbs have been experiencing trombonista activity for a couple of years now," he said. "At first it was just a trickle coming down from the mountains. But gradually the influx gathered strength, and in the last month there has been a flood of migrants and now, as you see, they're right here in River City's inner city! I just hope they don't decide to go over to the banks..."

The president of the Second National Bank of River City, J.C. Penny, said, "Bring 'em on! We're having a special. If they deposit $100 dollars in a brand-new savings account, we give them a brand-new pennywhistle! Lookee here, it's got my picture on it!"

The three main mouthpieces for the trombonistas, who call themselves the Quattro de Cinco, agreed to have this photo taken, on condition that they all be allowed to wear anarchist black to match their eyes. When asked, "Hey, where's the fourth guy?", the pair glared contemptuously and farted in the general direction of the photographer. The enthusiasm for a photo session quickly ebbed away. Reaction in the town was mixed. One feller, out in front of the general store with the quaint name General Insanity said, "Can't hardly blame them trombonisters. After all, it's cold up in them thar hills!" The headmaster of River City High, Mr. R. McConnell, was much less sanguine. "This is what comes of too much idleness and allowing pool halls to operate in town! We have to put a stop to it or our kids might end up like this:

In an interview conducted by megabone through the mayor's picture window, reporters asked the assembled trombonistas what they hoped to achieve. "We're tired man," said one. "Why do we always have to be the leaders, huh? Sometimes we just wanna sit in the back and let some other Primo Donor take the screaming lead." When asked what it would take to get them out of the mayor's office, someone shouted, "Just don't send that Bill Clinton here with his damn saxophone!"