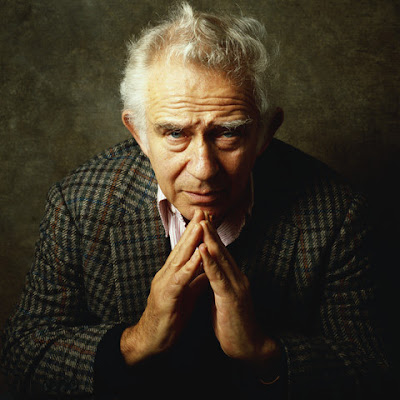 January 31, 1923 - November 10, 2007
I've been reading Norman Mailer since I was a teenager. Since, according to my Blogger profile, I'm over 200 years old, that's a long time. The first book of his that I read was his first book, The Naked and the Dead. His war novel. Everybody needed a war novel in those days. I don't remember much about it, but it must have been good enough for me to want to read more.

When I heard that he died, I did a quick inventory of the books that I've read. Not all of them, by any means, nor even the majority of his output, but enough to get a good sense of what kind of writer he was. The Naked and the Dead. Armies of the Night. Of a Fire on the Moon (a curiously self-absorbed account of the moon landing). The Executioner's Song (a masterpiece of detailed journalism). Ancient Evenings. Tough Guys Don't Dance. Portrait of Picasso As A Young Man.

Mailer is probably better known for his non-fiction than his fiction. But one of the best books I ever read by anybody was Ancient Evenings, a long, rich story of ancient Egypt and a man who, through several reincarnations was general to Pharaohs and many other things. Fabulous writing.

I speak not about his private life -- much of which was public -- nor his persona, nor his image. His writing ranks with the best that the USA has produced.