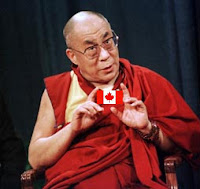 Security measures at the Yoni School are similar to those found at airports. They are porous and whimsical. It is, after all, not a maximum security reform school, but rather a halfway house of sorts. Halfway between po-tic anarchy and grammatical orthodoxy. The electronic arches at the Yoni school invariably let pass anyone carrying a fountain pen. A volume of Charles Bukowski, however, sends alarums through the system that register several points on the Richter scale as far away as Ottawar, that paragon of political connivance. Do you understand me? Probably not. I scarcely understand myself.

However, what I am trying to convey here is that under certain circumstances, one may leave the environs of the Yoni School, with a pass authorized by Nurse Ratchet and various under-secretaries of literary health, and partake of the doings of society at large. Therefore, I was permitted to go and pay homage to the modern-day Chenresig, His Holiness the 14th Dalai Lama yesterday in Hawgtown.

He started off by saying that altho he's visited Canada several times, this is the first time he has come to this country as an honourary citizen. That drew an appreciative round of applause.

Here are a few of the themes on which he spoke:

We must realize that the world is not composed of isolated, more or less self-sufficient villages anymore. Everyone is dependent on everyone else now...for food, for energy, for clothing, for shelter. Therefore, we must begin to develop a concern for the welfare of people all around the world. The kind of concern we must develop is like the feeling of love and affection that a mother feels for her child.

If we think of the 20th century as an age of violence and bloodshed, we should work to make the 21st a century of dialogue.

NATO should move its headquarters to Moscow to help bring Russia into the community of European nations, in a unified force.

We treat our animals little better than vegetables. So, in addition to developing concern for the 6 billion humans on our planet, we must begin to change our attitudes towards the animals.

It is time to begin teaching our children in a way that develops not only their brain power, but the power of warm-heartedness.

He praised the US as a beacon of democracy, but strongly suggested that the billions spent in Iraq would have been more useful educating, training, and feeding Iraqis. The money spent on armaments, he said, was a complete waste.

When all is said, His Holiness is an optimistic kind of guy. Where I, for example, often see the world going to hell in a handbasket, he sees progress being made. In fact, he said that the 21st century, so far, has been less violent than the previous century...in spite of Iraq, in spite of Darfur, in spite of terrorism.

And when he uses the word "dialogue" you can be sure he is thinking of China.