Um, did I mention that Canajun politics get interesting sometimes? Yes, I think I did in the previous post. Here's another example, this one on the federal level.

Canaduh has a minority parliament at the moment. It's been a long moment. Two years of Constipated minority government. And before that, some months of Gliberal minority government. For those who don't follow this, minority government means that the party with the most seats in the House of Commons does not have a majority of the seats, so that whenever a vote comes along, the governing party must depend on some other party to vote along with it. Usually that's one of the so-called "Third" parties, of which there is more than one. There are two: the Floc Québecois, which has seats only in Québec, and the NDP (aka Nearly Demented Party) which has seats only in its own mind. That leaves Her Majesty's Loyal Opposition, the official opposition party, which is the Gliberal Party of Canaduh. And there is also the odd Independent Member of Parliament. And believe me, that is odd, because the party system has a stranglehold on the Parliamentary system in this our Dominion of Canaduh.

Which leads us into the latest scandale to hit the House. By my (admittedly hazy) calculations, we've had nearly three years of minority government around here. And that's the true beginning of this story. 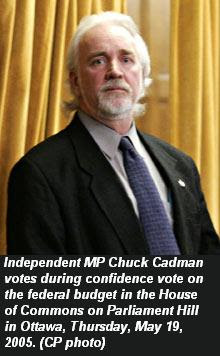 Back when the Gliberals led the minority government, the array of forces was so evenly split that one or two votes could totter the teeter and bring down the government. And it just so happened that there was one Independent MP, name of Chuck Cadman, who represented a riding somewhere out there on the left coast. (There's a whole back story there, too. He'd been formerly a Constipator, but was dastardly done out of his re-nomination for his seat. He ran as an Independent and beat the pants off the Constipated candidate who had usurped his place. So, by conviction, Cadman was a Constipator, but he sure as hell didn't owe them much.

Chuck Cadman was also dying of cancer. And this is where the story gets sticky.

The leader of the Constipated Party of Canada, our most beloved Stephen Harpie, lusted mightily after the job of Prime Minister. He dearly desired to defeat the Gliberal government in a vote of non-confidence and thereby trigger an election which he deemed he could win. (And which he eventually did win, although with only another minority...)

There was just such a non-confidence motion coming up, engineered I forget how, but never mind. And Harpie wanted Cadman's vote badly.

But here's the rub. Cadman, even if he agreed with Harpie, was highly unlikely to help bring down the government. And here's why: as an MP, he was entitled to death benefit insurance to the tune of $400,00 or so. Well, his wife was. But if the House dissolved, technically Cadman was no longer an MP. He was, rather, a candidate. And the question of death benefits was up in the air if he died while running for office. So...better for him and his family if he died while actually in office. Not everybody was aware of this, but a sufficient number of people were in the know including, according to his own account, Stephen Harpie.

Nevertheless, a couple of Constipated officials decided to approach Mr. Cadman anyway. And the allegation is that he was offered a $1M life insurance policy if he would vote against the government, and thereby cause it to fall and precipitate an election. Which the Constipators hoped to win.

Well, when push came to shove and shove came to vote Mr. Cadman voted with the governing party, those slippery Gliberals because, to him, a death benefit in the hand was better than Constipator promises in the bush. And furthermore he said publicly that he had been offered nothing more than an unopposed candidacy in the next election and funds to help him campaign as if he were an official Constipator candidate. In other words, no real financial benefit to sway his vote, which would have been totally illegal.

But now, a new biography of Cadman, Tom Zytaruk's book Like a Rock: The Chuck Cadman Story, has revealed the alleged machinations of the Constipated Party. The book claims that Cadman, on his deathbed, confided to his daughter about the offer made to him.

Who the hell knows whether this story is true? Only the people who may have made such an offer, and Cadman himself, who is dead.

But the Gliberal Party has been having a field day with this. If the offer was made in bald terms (which seems unlikely...how could anybody be that stupid?) it was illegal as hell. Accusations have been flying in the Common Bawdy House of Commoners.

And on the Gliberal website. Have a look at these articles:

And what has been the result of all this fur flying? Prime Mystery Stephen Harpie, who is nothing if not petty and vindictive, has decided to sue the leader of the Gliberal Party, M. Dion and the Outremonts, and several other members as well, for libel. It's a first for the Canajun political system. (See, in Canajun politics, you can say damn well anything you please in the Common Bawdy House of Commoners if it's not un-parliamentary, and there are no repercussions. But if you repeat statements outside the House, you open yourself to law suits. It's called Parliamentary Privilege or something like that.)

The main defence against charges of libel is truth. If your statements are true and proveable, you can't lose. But in this case, proof may be hard to come by. As for statements on the Gliberal website, maybe they can argue that they were only "reporting" on statements made by members in the Common Bawdy House.

Now here's another twist. Cadman's wife Dona, who originally endorsed the tale of attempted vote-buying, will be a candidate for the Constipated Party in the next election!

Did I mention that Canajun politics can get interesting sometimes?

(PS. Anybody who has read this blog knows that I don't use the real names of individuals or parties when I write about Canajun politics. I make up new names to protect the guilty. In this case, however, I did use the real names of Cadman and his wife, cuz you have to give the story some touchstone with reality if you expect to be able to follow it. Now, if you click on the links, you'll get the real names of the parties involved. I can't be held responsible for others' inability to write proper satirical fiction.)