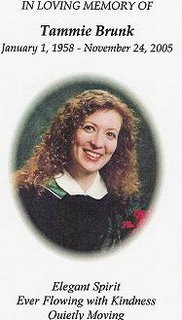 I went to Tammie's memorial service today. I wonder how many people have friends like this: someone they consider a close and dear friend, but who they don't really know all that well. At least not in terms of their day to day lives. This is how it was with Tammie and me. We met ten years ago as members of a weekly or bi-weekly discussion group of seven or eight people. This group met for about two years, and during that time we had some intense discussions. But through it all, I remember a lot of laughter. We became friends.

Not really the kind of friends who hang out together, though. After the group came to an end we continued our friendship by establishing a tradition of a yearly barbecue for the members. And that was about how often I saw Tammie after that. Once a year.

But it didn't matter. We (all of us) had an understanding of one another and an appreciation of each others' life journeys. So we gathered every year for our barbecue, gossiped, laughed, talked turkey, talked serious, caught up with what everyone was doing.

I remember Tammie, during the discussion group years and after as well, as someone who was forthright, direct, completely in touch with what seemed right and just to her. But she was warm and funny too. Loved cats. Cats especially. She was intellectually agile and emotionally intuitive. She brought out the best in us and demanded honesty from us by her own unflinching integrity. She looked you in the eye and you just had to tell the truth.

Two years ago she came to the barbecue with her head wrapped in a scarf. She was undergoing chemotherapy. Much of the discussion that evening centred around how things were going for her. Not great, as it turned out...But she was not defeated. She was not daunted. She was fighting.

This past summer Tammie didn't make it to the barbecue. She had intended to come, but she was again having chemotherapy, and not feeling well that day. We gathered anyway, of course, a smaller group now, and talked about Tammie along with other topics.

A few weeks ago I received an email telling me that Tammie was in palliative care, but not really wanting visitors. So I didn't visit.

Until today. I'm sure gonna miss her.
Posted by Larry Keiler at 7:23 PM

Hi Larry,
I read your tribute to Tammie and cried. It seems to me that those souls with that special something come into our lives to share and teach us and when they leave us it is too soon and too harshly. I feel your saddness.